I never thought I would enjoy exercising with my kids. A long time ago, before having my third kid, I had a gym membership and happily dropped my kids off at childcare before heading to a class or the elliptical machine. Then our budget tightened a bit to accommodate our growing family and then a pandemic hit. Right when I needed exercise the most, (thanks extra stressors and my post-partum hormones) finding a way to make it happen felt more daunting than ever.  Yet in true silver linings fashion, while exercising with my kids was initially a source of frustration, it became a source of joy and a fun piece of our family story.

It started with desperately needing help during the early days of virtual learning- I turned to Cosmic Kids Yoga on youtube to entertain my older kids. If the baby was not too fussy, I’d throw her in a wrap and do some of the yoga with them, just to move a bit. The kids thought this was the coolest activity and to this day they beg to do family yoga. Some days we added in some superhero workouts, (these are also easily found on YouTube) and then my son asked me to put on a GoNoodle that he watched during virtual school. Exercising with my kids did not fulfill the alone time I craved, but it did get my body moving and my endorphins going. Plus, this led to all of us enjoying movement more than we would have if I made the kids do everything on their own while I did my workout routine separately.

The incredible thing is this has grown past kid videos. When it came time to debate returning to the gym, I realized I didn’t want to go back to that model because I am enjoying my time getting strong at home with my littles. Working out with my kids still features Cosmic Kids every now and then, but it now includes them joining me for a yoga video I pick. It includes my daughter lifting weights with me; she begged for her own set of weights so I got her pink two-pounders to use while I lift my heavier weights next to her. She now proudly proclaims that she wants to play “tea party and tricep kickbacks!”

The best part about exercising with my kids is NOT that I have time to work out without having to schedule it exclusively around nap or bedtime. It is that they are learning exercise is a positive instead of a punishment. It took me years to undo the mental blocks around that. I am thrilled that my daughter’s memories of working out will begin with “I want to be strong like mommy” instead of “I need to get smaller.” My son’s first introduction to running is that you can run races to help a charity you love instead of the introduction I had, that running was something used to torture kids in PE.

Our kids are always watching. Sometimes that leads to cringeworthy moments of them turning every toy around them into a phone (that was a real red flag about my screen time…) and sometimes that leads to them asking if we can do a family hike this weekend since I went on a solo hike last weekend. I want to model for them that mommy still needs alone time, so I still carve out solo time a few times a week to go for a longer workout, but I have grown to love sharing exercising with my kids.

4 Tips for Eating Better in the New Year 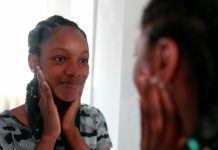 Is Self-Care Making You Feel Worse Rather Than Better?