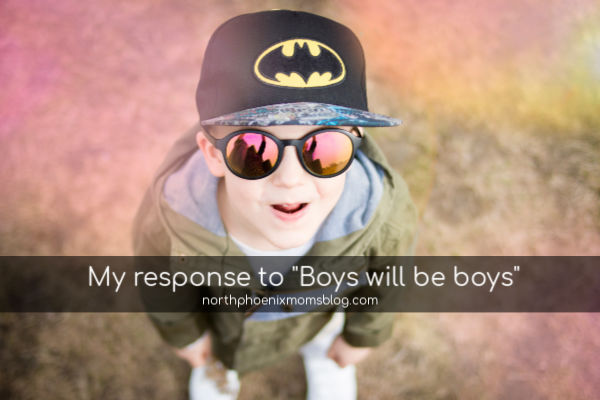 Dear Man that told me “boys will be boys”,

I get it, kids do things that embarrass us. I am not blaming you for your son jumping on top of mine in an effort to steal his new Hotwheel car. I am, however, not okay with your response at the event.“Boys will be boys,” really?! What does that even mean? Does it mean it’s okay with you that your son assaults mine to get what he wants? Is that really how you want to him to go through life? Know that he can just overpower someone physically smaller than him a take something that isn’t his? Did this even occur to you at all? Okay, okay, I am over reacting, a bit, but this just really got to me.

As a mother of two boys, you will never hear me say “boy will be boys” in response to their actions. This was an infuriating response and the fact that is fell out of your mouth so easily was an even tougher pill to swallow.

I refuse to allow my boys to go through life not being held accountable for their actions, simply because they are male. I refuse to teach them that it okay to fight, kick and hit to get something that they want, because they are boys and that’s what “boys do.” No, they aren’t just boys, and that simply will not do.  They are human beings and will be decent people, if I have anything to do with it.

I am sure at the end of the day, Man, you didn’t mean any harm with what you said. You may not even feel that way, but next time, think a little. Kids, at least mine, hear everything and remember even more. In fact, the next few times we have gone to the location of the instance my three-year-old has said he is keeping his toys in the car so “that boy” doesn’t try and steal them. I am not here to tell you how to raise your child, just rethink your response to their actions, maybe, just a little, please.

A Concerned Mother of Sons.

Side Note: In all seriousness, I think this situation just caught me completely off guard. I honestly didn’t even need a direct response from this little guy’s dad, more so, just him redirecting his child’s actions. I wasn’t looking for an apology from him or his son, because my kids too, do things that are clearly wrong. We can’t control every decision that our kids make, especially at 3 years old. But justifying his action in the way that he did, just didn’t seem right. Boys, girls, does it really matter, can’t we all try and be kind to each other?