There we were, sitting alone in a restaurant, laughing our heads off and playing with toys. We ate, smiled, and just enjoyed the one-on-one time. I was pretty oblivious to the looks we’d been getting, then I felt the eyes on me like magnets. I couldn’t turn it off after that. As I looked around the restaurant, I noticed strange looks on people’s faces as they stared in our direction. Then our waitress walked up with the bill, eyebrows scrunched a bit lower, a semi-present smile with the lower lip pronounced ever so slightly more than the top. I realized just then the looks I’d been receiving. Pity. People were looking at me with pity. 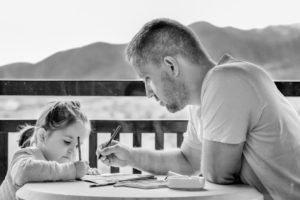 When we see single (or solo) dads in public, our first instinct is usually to gush over the cute scene. We go up to them, talk about how cute their children are, look on with puppy dog eyes as we melt over how adorable it is to see this strong man being so affectionate with his offspring. We commend them for stepping up and being present fathers. We praise them for doing it on their own. We place them on pedestals for… parenting.

In contrast, when we encounter single (or solo) moms in public, a very different response happens. For one, we may not even notice them because it’s commonplace to see a mom taking care of her kids. On the other hand, though, if we notice a lack of ring on her finger, we immediately start to feel sorry for the woman for having to do it all on her own. It’s a strange middle ground: pitying a woman and passing judgments on why she’s a single mother while simultaneously expecting her to be doing the very thing we’re observing – taking care of her children. In fact, some people even dare to think they aren’t doing enough.

I’m speaking generally, of course. This isn’t the reaction for every single person on the planet. But I do think it’s safe to say it’s the norm. We don’t always even realize we’re doing it. I, myself, have been guilty of looking at single dads with giant heart eyes… but it’s absolutely a double standard. And a harmful one.

So why do we do it? Why do we pity single moms, but fall in love with single dads? We’ve come a long way in terms of gender roles in parenting, but I think this phenomenon speaks to how far we’ve yet to go. We owe dads so much more than we give them credit for. Not only that, we owe moms the same kind of credit. Modern dads are taking paternity leave. Some are choosing to be a stay at home parent. Others may work from home. They’re sharing in the emotional and physical load when a new baby enters the picture by taking night feedings, participating in skin-to-skin, baby wearing, and the like. They are… parenting. It is just as much their role as it is the mother’s. We have to stop have such little expectations that we gush over a dad DOING HIS JOB. They deserve better. And so do moms.