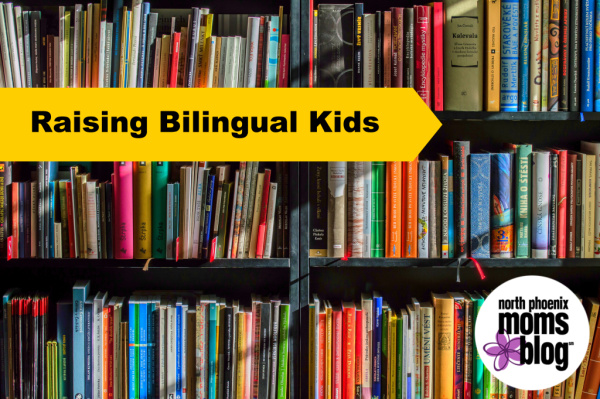 I was born in Mexico City and my parents gave me the gift of learning a second language at the early age of six. My parents learned English when they were young adults and realized that by gifting my brother and me the ability to speak a second language, they were opening more opportunities for us.

We attended a bilingual school. I would say learning another language at a young age has not only opened a lot of doors for me, it also made learning other languages easier. Who knew that being fluent in English would lead me to a job opportunity in Arizona where I would meet my husband on my first day of work or that I would interpret for a world famous Pastry Chef? Meeting Albert Adria was not even in my wildest dreams, let alone interpreting for him!

Knowing several languages has led me to great experiences, travels and love for other cultures and this is something I would love to pass along to my own children. When we first had my daughter, I vowed to only speak Spanish to her and I have to confess, it is not always easy. When your husband is not a native speaker and your family is not in town to help reinforce the language, it can get complicated but we have found our system and are now seeing the results. We skype with my family at least once a week with them and at age 5, my daughter is now making whole sentences in Spanish.

She is now enrolled in a DLSI (Dual Language Spanish Immersion) program, which has helped so much! It is not always easy to speak to my kids in Spanish all day long, but it is doable. If you are a bilingual parent and talk to your children in your mother tongue all the time, hats off to you! I need you to tell me your secret!

Now that my oldest is immersed in the language for at least half of her school day, I am more committed to reinforcing my mother tongue at home.

Here are some tips that have worked for us and could work for anyone teaching their kids another language:

Reading: Since my kids love to read, we read at least one book in Spanish at night. My little one is three years old so we are teaching him numbers, colors and shapes.

You don’t necessarily need books in a certain language to teach your kids, especially if you are a native speaker. “Poke-a-Dots” books are great for my son. We used them with my daughter when she was younger. My little one loves to poke the dots. I count in Spanish as he pokes through. At this point, I do not read the story in the book. I will just ask him how many animals he can find and then he starts poking away while he counts, so he is also learning barn animal names and sea creatures since those are the two books we have.

The library is a great resource for books! We have found his favorite book translated in Spanish. We have found great bilingual books too, classics like Three Little pigs, The Ugly Duckling, Little Red Riding Hood, etc. These are stories that my kids know already, so listening to them in Spanish is not so foreign. They understand the concept and they are learning new words in Spanish. Scholastic is also a great resource.

Cooking: My kids love to cook, so when they cook with me, I will give them instructions in Spanish. If they don’t know the word, I will say it English and reinforce it in Spanish. We make homemade tortillas at home and recently found a book at the library called “The Tiny Tortilla” which of course we had to incorporate into our bedtime stories. This book is written in English but incorporates a few words in Spanish.

Music: We have a few CDs in Spanish that my neighbor passed along and we found great resources at the library. I am also known for translating their favorite songs in Spanish, like “Old MacDonald” “ABC”, etc. My kids think it’s hilarious and they know the songs in English, so they can get the idea of what I am saying. You may have a lullaby in your language that you can teach your kids.

Alphabet Bingo: When we play bingo and it is Daddy’s turn to call out the letters, he does it in English, when it’s my turn; we do it in Spanish and most of the times my daughter will call them out in Spanish. The kids love to play bingo, well my little one just loves to shout “BINGO”, but hey, he is listening to the letters in Spanish.

Loteria: Usually referred to as Mexican Bingo, although it originated in Spain. Instead of numbers, it has images. I found a loteria template online but you can also find the board game on Amazon. It is a great way to learn fruits and vegetables in Spanish. We call out the images in Spanish and we say “Loteria” when the first player fills the game board.

Media: We love Super Simple Español. I have found nursery rhymes and songs I grew up with. Some of them have been included as part of my daughter’s homework.

Art: My little ones love to do arts and crafts. I use this as an opportunity to teach them words in Spanish, like colors, shapes, supplies, etc.

You may also want to check your nearby public library. Some of them offer bilingual story times.

Learning through play has worked for me when teaching my kids Spanish. Sometimes they don’t even notice that they are learning new words in a different language. We are having fun and we are reinforcing what my kids are learning at school. Speaking to them in Spanish all day long is challenging but I know in the end, it will be a great tool to have under their belts and hopefully they will also learn to love their mother’s culture and traditions.

Do you have any tips we can incorporate to our daily routine to keep reinforcing a second language at home?