This morning a little boy hit my daughter on the head. Hard. And on purpose.

I paused when it happened to see what she’d do so that I didn’t overreact and cause her to get more upset. Before he could do it again, the mom swiftly intervened and my daughter started crying hysterically. The boy’s mom handled it exactly the way I would have hoped; she took the boy, told him how wrong hitting was, told him to apologize (even insisted on making eye contact when he did), and had him sit in her lap away from my daughter while she worked through what she was feeling. It was swift, stern, and considerate. I was heartbroken for my little one, mostly because she seemed utterly surprised and confused when it happened.. But let’s be honest, this may have been the first time a kid hurt my daughter, but it likely wasn’t going to be the last.

I did the only thing I could after the incident… I held her in my arms and told her calmly, “Everything is ok.” She cried, hysterically, for 10 minutes. She’d calm down, look at the boy, then start crying again. After a while, another adult in the area said, completely sincerely, “Aw, are you being dramatic? You’re ok.”

And as I drove home, I thought to myself, she’s 15 months old… She literally CAN’T be dramatic. I know the adult wasn’t trying to be rude, I honestly think they were trying to somehow calm the situation, but it really got me thinking. Why do we do that? Why do we try to downplay our child’s emotions? Why do we attempt to tell them how to feel – or worse – label their emotions as dramatic or silly? Do we honestly think we’re doing them any good by trying to hush their emotional response and just move on? Or are we really saying these things not for our child, but for the adult? 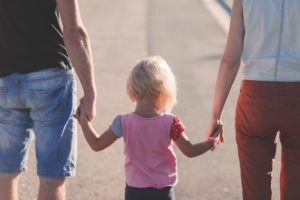 I’ve spent a lot of time reflecting on my own behavior, particularly since becoming a mother. I consider it vitally important for humans to be able to identify and articulate their emotions – it’s necessary in conflict resolution, it’s a pathway to clear communication, and it’s honestly imperative for mental health. That being said, my husband and I work really hard to validate our daughter’s feelings and avoid telling her how to feel. We believe validating her feelings is the first step in helping her to identify those feelings herself, and eventually be able to articulate them. She’s still very young, but we’re trying to get into the habit of it now so it comes more naturally when it really counts.

I knew she was physically ok after getting hit, but I also knew her heart was hurting. Who am I to tell her to stop crying, to calm down, or that she’s being dramatic? I want her to know that her feelings are ok, that they matter, and that everything will be ok. I want her to know that yeah, that moment was scary and hurtful and it’s ok to cry because of it. Sure, easy to do when it’s a situation like that… but truthfully, we hold ourselves accountable for maintaining this kind of understanding and empathy even during the more trying times.

It’s not easy. I frequently catch myself saying things like “you’re fine..”, particularly in public when I’m personally feeling pressured by surrounding adults to say or do something when my child is upset. But when I recognize it, I shift my language so that I validate her feelings rather than downplay them. It’s hard work. It takes constant reflection. And it’s even harder when other people intervene (even with positive intentions). For us though, we feel the benefits far outweigh the challenges.

Is this something you’ve been working on? What are your secrets for holding yourself accountable?