My family loves to get outside when the weather is as gorgeous as it is. You can find us strolling the Greenbelt, out at the Train Park, or spending time visiting our favorite residents at the Phoenix Zoo.  But one of our favorite things to do together is go for a hike.  It’s like taking our boys out on an adventure, exploring nature and never knowing what you’re going to find along the path.  Our great state is full of incredible hiking trails and people travel from all over the world to visit them.  Here in the Phoenix area, we are so lucky that we don’t have to drive for too long to get to some great trails that are suitable for the kids and mamas feel like we are getting a workout in.

Two trails that my family recently adventured on are located in Cave Creek at the Spur Cross Ranch Conservation Area.  According to the map I was given at the ranger station,

The first hike I did with my husband, our two boys (ages 7 and a fresh 4), and our dog was to the Spur Cross Trail, which then looped up to the Metate Trail, to the Towhee Trail (a short branch trail off the Metate which then looped around and joined back up to the MT), back to the Spur Cross Trail where we started.  The whole thing was approximately 2 miles, which took us about 3 hours. Partly because of little 4-year-old legs, partly because we had to stop and greet every single dog we met along the way. Partly because we stopped to examine things, partly because we sat on the bank of the creek to play in the water, partly because we stopped at the Solar Oasis to eat lunch and play some more. Mostly it took so long because we were just not in one bit of a hurry to be out of the sunshine, beautiful weather and fresh air.

The first half of the hike on the Spur Cross Trail was a wide, well maintained trail that is used by hikers, horseback riders, and mountain bikers.  Certain parts were rockier than others, but not at all hard to maneuver by foot. Definitely too rocky for a stroller, though.  The scenery was beautiful, sprawling desert surrounded by mountains.

We reached a point on the trail marked on the map as the Old Gate.  At the Old Gate we hooked a left and made our way on the Metate Trail.  We all learned that day that a metate is a hollowed stone on which corn and grain are ground using a smaller stone.  A highlight on that trail is that there is an actual metate, which was super cool for the kids (and the grownups) to investigate. 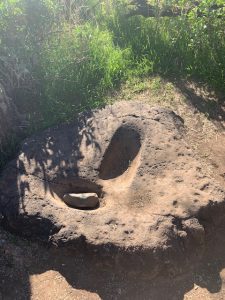 The Metate Trail is very different from Spur Cross.  The pathway is more narrow and since it runs alongside (but above) the Cave Creek it is really green and grassy.  At one point, we came to the creek to cross over.  There were planks laid out across the water so you could walk safely across and not get your feet wet.  My family decided to set our backpacks down and take off our shoes and wade in the water for a little bit.  The boys had a blast climbing over rocks and our dog had the time of her life.

A couple things to note about this hike.  There is a $3 access fee for adults.  The fee must be paid in cash or check, as they do not accept credit cards due to zero electricity or WIFI.  If the station is not manned, there is a box that asks you to use the honor system.

The second hiking area we explored was the Jewel of the Cross.

My boys and I did this trail after school on a half day with our dear friends, a fellow contributor at our Scottsdale Moms sister site, and her 7-year-old son. Talk about a fun adventure with three boys and two mamas! This hike was about 2 miles but according to the map it could be a little longer depending on the route taken. Along the way we crossed over the creek and also walked along side it. At times the creek side was completely accessible from the trail and at other times it looked a little risky to get down to.  We also passed by an old mine! 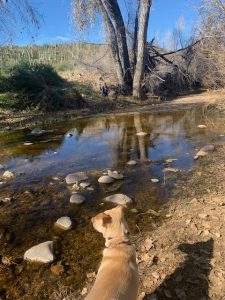 As far as the ease of the trail, I would say it was easy, however the map says it’s moderate. My 7-year-old said it wasn’t too hard, but there were lots of obstacles. I think that’s a great way to put it. Expect to step up on and down from some big rocks and there were a couple tree stumps to get around. The cacti are very close to the edge of the trail in some spots so you have to be quite mindful of them. The terrain in some areas was a bit rough and so we gave a piggy back ride to the little one. But we saw lots of families along the trail and kids of all ages. There was a lot of shade and greenery along the way, which made the hike even more enjoyable in the mid-afternoon sun. 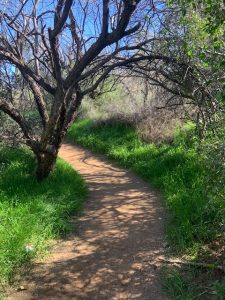 The best part of the hike was coming up to a spot at the creek where it was sort of beachy and the kids could take off their shoes and wade in the water.  Pro-tip: Pack a towel and maybe a change of dry shorts in your backpack.  Our kids air dried and walked out with wet shorts, which was fine, but the water was pretty cold and even though it was a warm day, it was only 75 degrees.  Plus, the last thing you want on a hike is for them to find even just one thing to complain about. There was no fee to access this trail. 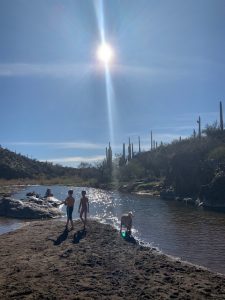 Both of these hikes are just so beautiful.  It was the first time I had been to either one and I was stunned that such lush landscaping existed in the valley.  We are certainly so blessed to live here in Sunny Arizona where we can get out and enjoy this kind of weather at this time of year.  Go and get out there while you can, North Phoenix Moms!  It will be blazing hot before we know it.

You can view the map of the whole Spur Cross Ranch Conservation Area, including the trails I have mentioned here. 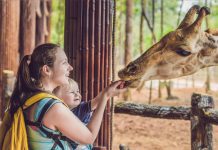 Family Friendly Outdoor Things To Do in Phoenix 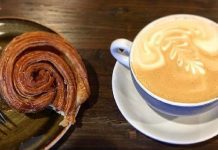