This month we share our family stories. Every family has many of them; I am going to share a few of our family’s in three vignettes. 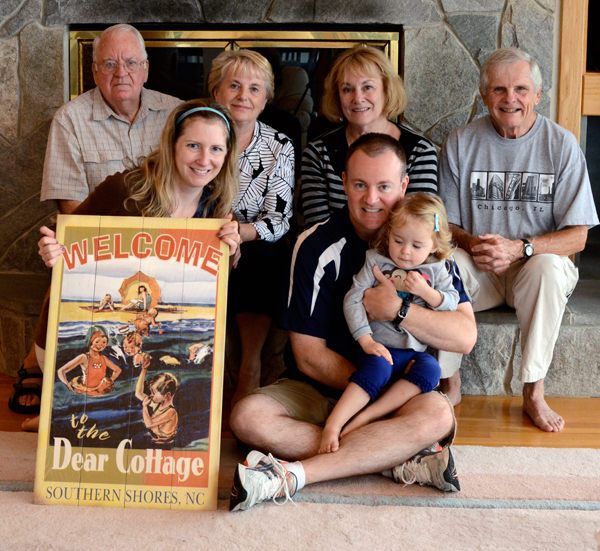 Act One- My mother-in-law, Roswitha (“Rosie”) was born and grew up a few miles away from the Berlin Wall in Germany. She was born shortly before the end of  WWII so I can imagine things were a bit tense in this area. My father-in-law was 17 when he joined the Air Force, leaving West Virginia and 10 siblings behind. Somehow they both ended up in a nightclub in Germany and the rest as, they say, is history. My mother-in-law left Germany for Maryland (where she lived with her new in-laws) at age 19. She didn’t speak any English. My father-in-law didn’t speak much German. He left her in the US to serve a year in Thailand and somehow she survived, got a job,  learned English, had my husband by age 23, and became an American citizen AFTER her first born. They have been married almost 50 years. How did two people from different countries randomly come together like that? How did they know they were “the ones” for each other, despite a language and culture barrier? Fate, I’m thinking.

Act Two- Fate had a meeting with me in August of 1994. I had just moved from Florida, where I had lived most of my life, to Albuquerque.  l had arrived late to register for classes at the University of New Mexico, where I needed some prerequisites to major in pharmacy. Because of this, all the daytime Organic Chemistry labs were full; I had to register for a night lab. Not my first choice. But, as fate would have it, a young lieutenant stationed at Kirtland AFB in Albuquerque decided around the same time he wanted to leave the field of engineering and pursue medicine. That decision led him to taking an Organic Chemistry lab at night after working all day.  How did a girl from Florida end up in THAT lab? How did an Air Force brat who could have been stationed anywhere in the country decide this was the time to take a night time lab? I have asked myself these questions over the years. Right place, right time.. my lieutenant is now a lieutenant colonel and  we have been married 16 years.

Act Three- I didn’t have an easy pregnancy. My daughter wasn’t growing well, she had issues with her umbilical cord and suffered from growth restriction. Towards the end of my pregnancy, I was being monitored twice a week. It was a stressful time and I ended up on bed rest at 32 weeks. During this time, my father (who was recently retired) was a good source of strength for me. I would call him and he would console me and tell me all we had to do was get her to 4 pounds 10 ounces, which is the weight he was at birth. This was the “magic” number; my father has always been very physically healthy and strong. The point he was trying to make was he was a survivor from the start. I know there are many, many babies born at far less than 4 lbs 10 oz who thrive. My daughter was not even really a preemie. At 34 weeks she was born by c-section. Full circle, she weighed 4 pounds 10 ounces.

Do you have any stories like this to tell from your own family tree? Stories of fate or coincidence? We would love to hear them in the comments.