I’m going to get a little more personal than I usually like to get. And it’s probably going to get a little awkward. With a title that has the word “boobs” in it, you’d think it might be fun, but no. This is a moment of self-reflection in the midst of a mom moment where I asked out loud to myself “what has happened to me?” and immediately wanted to drown my sorrows in a bottle of wine. Grab your drink of choice, enjoy a little story time, and a good laugh at my expense.

I blossomed very early as a young woman. I was the first of any of my friends or classmates to (have to) wear a bra and it was one of those things that I was always very self-conscious about. Of course, not only was I a young girl with boobs and a bra, they were big and there was no hiding it. Bra shopping with my mom was the literal worst to my tweenage self and, to this day, I remember how angry I got the moment my mother uttered the words “bra shopping.”

These pre-mom boobs made life seemingly difficult. Button up shirts were never an option unless I wore an undershirt. Cheerleading took two bras. Running required a sports bra made of unicorn tears and a handful of prayers. For goodness sake, hugging could be awkward, depending on the height difference. These were things I learned to live with and joke around about but the dislike for my chest was real. 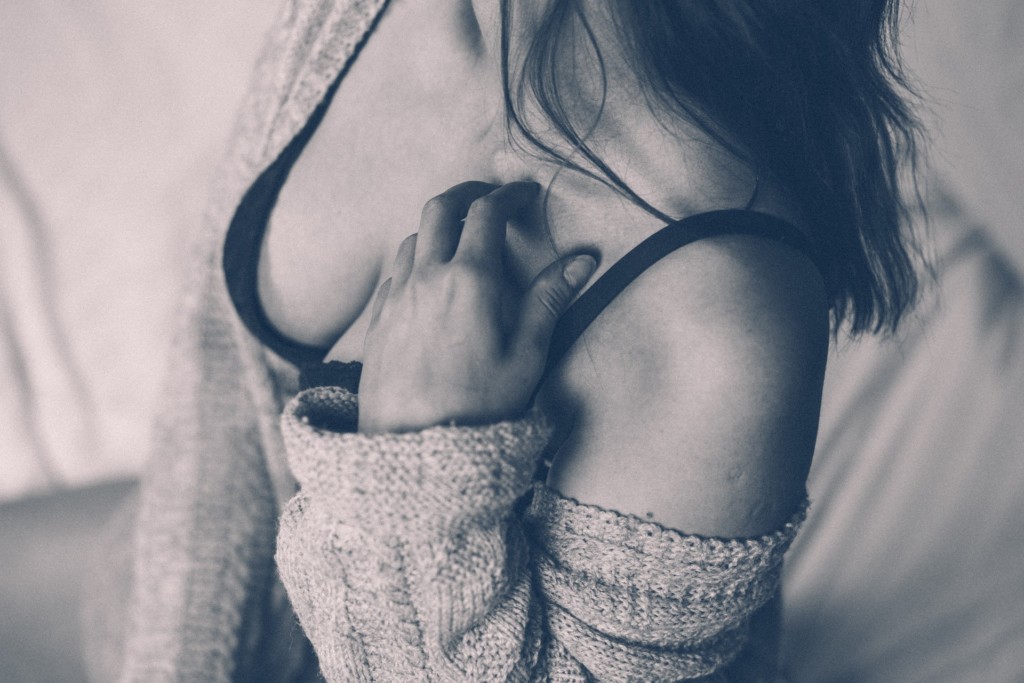 Enter the beginning of the mom boobs. Pregnancy taught me that I didn’t know pain or difficulty at a younger age like I once thought I had. Pregnancy breast pain is no joke. Showers took a pep talk, my husband was lucky if I hugged him for a good 4 month stretch, some shirts were off limits because they were too form fitting and therefore painful, and I dreaded the impending growth that everyone spoke of… They were big enough already, they certainly didn’t need to get bigger!

HA! Well, they did. And then I learned about the pain associated with breastfeeding. Repeated the whole process a second time and here we are. My moment of reflection happened not long ago while I was sitting on the couch. We had finished eating dinner (homemade) and the kids were playing together on the floor (no TV) while my husband and I sat on the couch talking to them. Far from the norm, I was totally nailing my mom gig that night.

Then the moment came: I leaned over onto a pillow to relax and quickly glanced down…and where I had spent my whole life seeing a large, voluptuous shape I now only saw a lifeless leftover of what used to be my boob. The skin looked sad and old, like the life had been sucked out of it. You guys, I literally poked it. I poked it like you’d check to see how well done your steak is. I guess maybe I hoped that poking it might bring it back or make it stand at attention again. Clearly, it didn’t work. I’m not sure if the look on my husband’s face was one of horror, disgust, or extreme amusement at my own reaction but I looked directly at him and then again at my defeated, deflated chest and cried “What happened to me?!”

I should’ve expected it. Lefty (yes, that reference was a norm in my house) was always the overachiever when it came to nursing. Both my babies favored that side, so I guess it had to deflate and go to boob heaven sooner or later. This is one of those postpartum things that nobody talks about, probably because it’s terrifying but also because it’s one of those things that takes a while to rear its ugly head. Two kids and three years later we’re deep in the trenches of postpartum issues and when something pops up (or, uh, falls down in my case), it is not pretty.

Accepting your new mom bod is one of the hardest parts of motherhood. It seems selfish to care about something so seemingly superficial when you just spent the better part of a year literally growing a tiny human but we’ve had our bodies our entire lives. Getting used to a new one feels unbearable at times. Even knowing that, it’s still easy to hate on the current mom boobs. Looking down to see a sad, deflated balloon in my cute bra was not what I ever wanted or expected to see. They’re not as full and certainly not as perky as they used to be. They’ve stretched and tried really hard to shrink back to normal after two pregnancies. They’ve sustained two babies with over 30 combined months of nursing. They’ve been clawed at, grabbed, bitten, smacked, and snuggled by those babies. They’ve been a source of comfort for them and a (surprising) source of pride for me. So, when I think about it that way, I guess it’s not so bad. The saggy skin most definitely sucks, but the work they’ve put in has been solid. Depending on my bra and shirt choice, most days I can forget about “the incident” that day. It’s a work in progress to learn to love the new mom bod and my mom boobs. We’ll never love it all but for now I’m going to go pour myself a glass of wine and say cheers to at least finding the silver lining in the changes I haven’t grown to yet accept… because that’s definitely a battle worth fighting.