This is a story of hope. I always think about the story of my little Yorkshire Terrier, Abby’s incredible journey every year at this time. I adopted Abby 9 years ago on January 30 and on February 2 she became a runaway, and was gone for 5 days. She went out to the backyard through the doggy door and as best as I can guess, she hopped the brick wall using the planter box as a starting off point. Back then she was super agile and could spring up like a rabbit.  She’s an old gal now and while she has a hard time just getting up on the bed, she still has a lot of spunk to her.

In her previous life she lived with an animal hoarder and all the other dogs & cats out in Apache Junction. When I got her, she was dreadfully skinny and not an ounce of fat to keep her warm.  It happened to be the one of the coldest days with the temperature overnight below freezing. I only had Abby for 3 days and on day 4 I came home from work and she was nowhere to be found. She wasn’t wearing a collar and wasn’t chipped. She was in no shape to navigate such unfamiliar territory in the freezing cold. I had an army of family and friends out searching for her that night. We drove and walked the neighborhood with flashlights, asking neighbors if they had seen a Yorkie running around. Nobody saw anything, but they didn’t hesitate to put the fear of coyotes into me. I put up lost dog posts on Craigslist and Petfinder.

The next day, with the help of an incredible friend who kept me on task and level headed, we made signs to post around the neighborhood and even went to the Maricopa County Animal Care and Control, AKA the pound. What an awfully heartbreaking place that was!  Not knowing what happened to her was the absolute worst feeling in the world. I was feeling pretty hopeless and I just knew that the realistic chances of her finding her way home were pretty slim. Even still, I left my back gate open with her little stuffed animal gorilla, her one possession she came with, sitting against the fence and prayed nonstop for days that she would find her way home.

On the fourth day of Abby being gone, I got up early and went to all the area Starbucks to post a picture of her on their community boards. I had been to so many places like vet clinics and other animal shelters to inquire about her and was repeatedly told that since she’s a Yorkie and definitely a desired breed, it was likely that she was picked up by a person who decided to keep her. She had no tag and no chip so the only way anybody would be able to get her back to me was if they saw my Craigslist or Petfinder posts. And then there were the really uplifting folks who kept reminding me of all the coyotes that cruise our neighborhoods searching for little doggies who ran away from home. I came home from Starbucks on the fourth day and I sat on my couch and sobbed. I felt so terrible for letting her down. I was also so mad at her for running away and not knowing what a good home I was going to give her. In that moment I knew I had done all I could for her. If she wasn’t going to come home to me, I prayed that at least she was warm in a home where she would be loved and cared for. I can’t explain why I loved a little dog that I only had for 3 days, I just knew that she was MY DOG and that we were meant to be family so I wasn’t going to give up hope. Just then, as I was coming out of my painful, sorrowful, full-blown ugly cry, my phone rang…

The voice on the other end of the phone said, “I think I have your dog.” The lady’s name was Donna and she was in her seventies. She lives in Flagstaff and was going to visit her friend in Mesa. Somehow, she got lost in Scottsdale. She was at a red light at McKellips and Hayden when she saw this little Yorkie running around the gas station on the corner. This is about 5 miles from where I lived. She pulled into the gas station and called the dog over. The little dog jumped right into her car and licked her face. Donna, who happens to have a Silky (looks very much like a Yorkie), headed over to her friend’s house and after spending a few days there, the friend’s grandson came over and he helped them use the internet where they searched Craigslist.  They miraculously found my post for the lost Abby. Praises to Heaven that she managed to not get hit by a car crossing so many busy streets, that Donna found her on the day she went missing and that she didn’t spend the night out in the freezing cold. Instead, she was cuddled up on the lap of nice lady. For the first few days, they didn’t know what to do with her. It wasn’t until that morning that the grandson came by and showed them how to use the internet. Naturally, I offered to get in my car immediately and drive over there, but Donna insisted that she drive Abby to me. I think she wanted to check out my house and make sure that I deserved to keep her. Thankfully, after fully inspecting my home and my yard she decided that Abby, who they had been calling Rosie, was in good hands with me. I was never so happy to see a dog I barely even knew as I was when Abby jumped out of Donna’s minivan and ran up to me.  It was in that moment that I discovered that Abby could actually smile and she had a big grin on her face to greet me.

That afternoon, I went to get Abby a tag with her name and my phone number on it. Donna bought Abby a collar while she had her and she still wears it to this day. That tag has saved the day many times as Abby continued to find a way to escape and take off running. I once ran after her down a major busy street in a cocktail dress, high heels and an updo! I even decided that my then boyfriend-turned-husband was The One the first time he had to go off looking for her. Finally, after taking her to training classes, Abby learned her important role in our pack and nowadays I trust her completely not to run off. She hangs out in the front yard with us without a leash and while she might sniff her way over to the neighbors’ yard, she never goes far and always comes right back when called.

Abby Rose is such a loving and loyal little dog. She makes friends everywhere she goes. She is hope personified.  She reminds me that even when things seem bleak and dark with no happy outcome, there’s someone else in charge who is weaving together pieces of the story that couldn’t possibly been imagined.  It is with Abby’s story of hope that I know that God loves all creatures, great and small and that even if it’s hard to remain hopeful, always remain faithful and to expect miracles to happen. 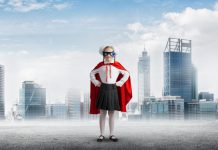