One of the things I love about living in a big city like Phoenix is that there are so many offbeat, interesting things to see and do.  I’ve lived here for over 8 years now and haven’t even come close to finding out all that Phoenix has to offer.  A few weeks ago, I did discover one of our city’s lesser-known gems- the Japanese Friendship Garden.  Have you been?  Did you even know it existed?  It was a gift to Phoenix from our sister city of Himeji, Japan.  My daughter Madeleine (age 4) and I had a great mother-daughter outing… maybe you can do the same with your kids or a friend!  Here’s what you need to know:

The Japanese Friendship Garden is tucked away downtown, right by Central and McDowell.  (3rd Ave and Portland, to be exact).  You could drive there, but whenever we go downtown, especially with the kids, it’s always extra fun to ride the light rail.  I usually catch the light rail at the very northernmost stop, at 19th Ave just south of Bethany Home.  There’s a big park ‘n ride lot next to the station and a day pass is just $3, with kids 5 and under free.  My daughter loved riding on the train!  We rode all the way to the Central and McDowell stop, and exited right next to the Spaghetti Factory and the Burton Barr Central Library.  It was about 3 blocks’ walk over to the Friendship Garden, which is at the southwest corner of Margaret T. Hance Park.  I had packed some fruit and picked up some fast-food burgers, so we had a picnic in the park before entering the Friendship Garden (there’s no food allowed in the Garden grounds).  Next we paid our admission ($5, kids 6 and under are free) and bought a bag of koi food for an extra dollar.  This turned out to be an excellent purchase because feeding the koi was by far the highlight of the trip for Madeleine!  The koi are hungry as well as beautiful, and there are several spots to get close to deep water to feed them.  Madeleine squealed with glee as the fish practically took the food from her hand!

The garden is as close to a lush Japanese garden as one can get in our rather desert-y city, with green lawns, pine trees, bamboo-looking bushes, artfully placed walkways and rock formations, and a beautiful central lake with waterfalls.  There are several traditional Japanese statues placed throughout the garden, bridges over a rushing stream, and in the very back, a tea house where the garden hosts tea ceremonies performed by a master.  (The tea house requires separate reservations and we didn’t go in during our visit).  My daughter got her first camera for Christmas, so she had a wonderful time playing photographer to all the pretty vistas.  The garden is small, about an acre, and the circular pathway took us about 15 minutes to walk slowly around.  We went around two times, fed the koi, stopped in at the bathrooms (which are as beautiful and well-designed as the rest of the garden), and sat on a bench to watch ducks swimming by.

My daughter and I had a wonderful visit and I hope to take her there again soon!  A word of warning, however- I would not bring my 1-year-old son to the garden yet, because they try to keep a tranquil atmosphere (In other words, there are rules about staying on the path and keeping voices quiet).  Some of the bridges and paths next to the water are not fenced, either, so this would not be the best place for toddlers or energetic younger kids.  I’d say it’s best for babies who are still content in strollers, or kids around age 4-5 or older.

As an additional treat, when we left the Friendship Garden and headed back to the light rail stop to catch the train uptown, we stopped in at the Burton Barr Central Library.  If you’ve never been before, it’s worth going for the 5-story open atrium and the glass (!) elevators that take you all the way to the top, as well as the panoramic view of downtown Phoenix from the 5th floor.  There’s a great kids’ section and indoor water features, which makes it a cool and relaxing place to be.  We picked up a sequel to The Cricket in Times Square and then caught the light rail back to our car.  Altogether, this was a great 4-hour outing that cost a grand total of about $12 for everything we did!

If you want to visit the Japanese Friendship Garden, be sure to check their website (japanesefriendshipgarden.org) because their hours change month to month.  I hope you go and have a relaxing, fun time!

A newly designed Pei Wei and a gift card giveaway! 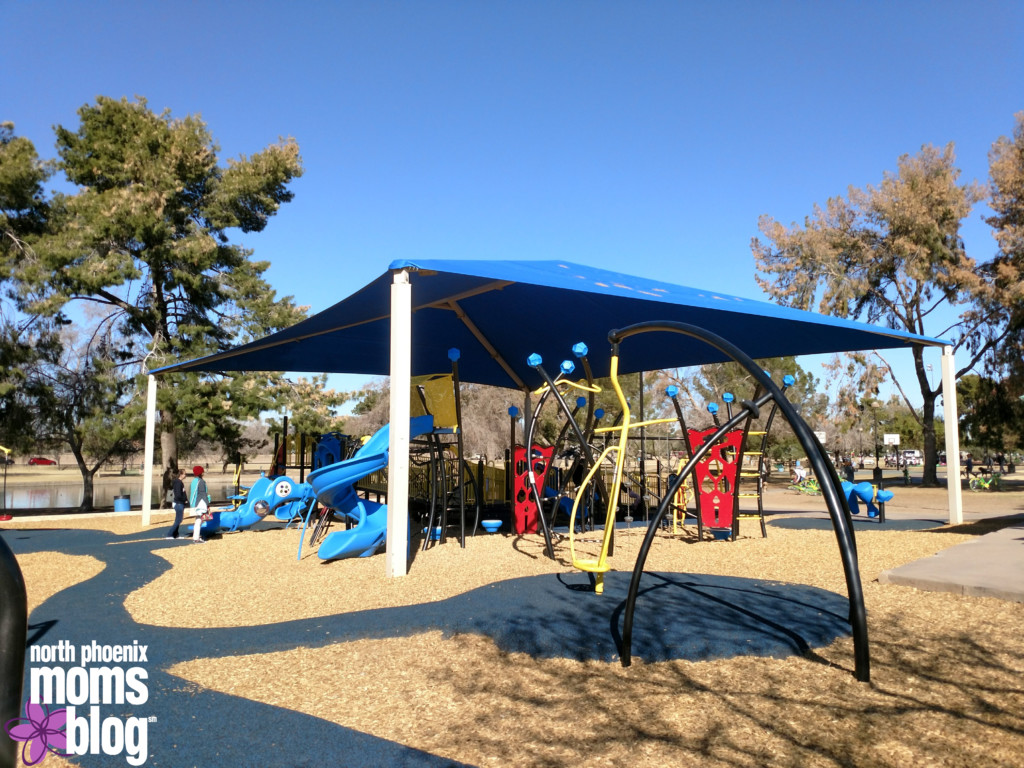 A Mom’s Guide to the Best Neighborhoods in Phoenix :: Desert Ridge