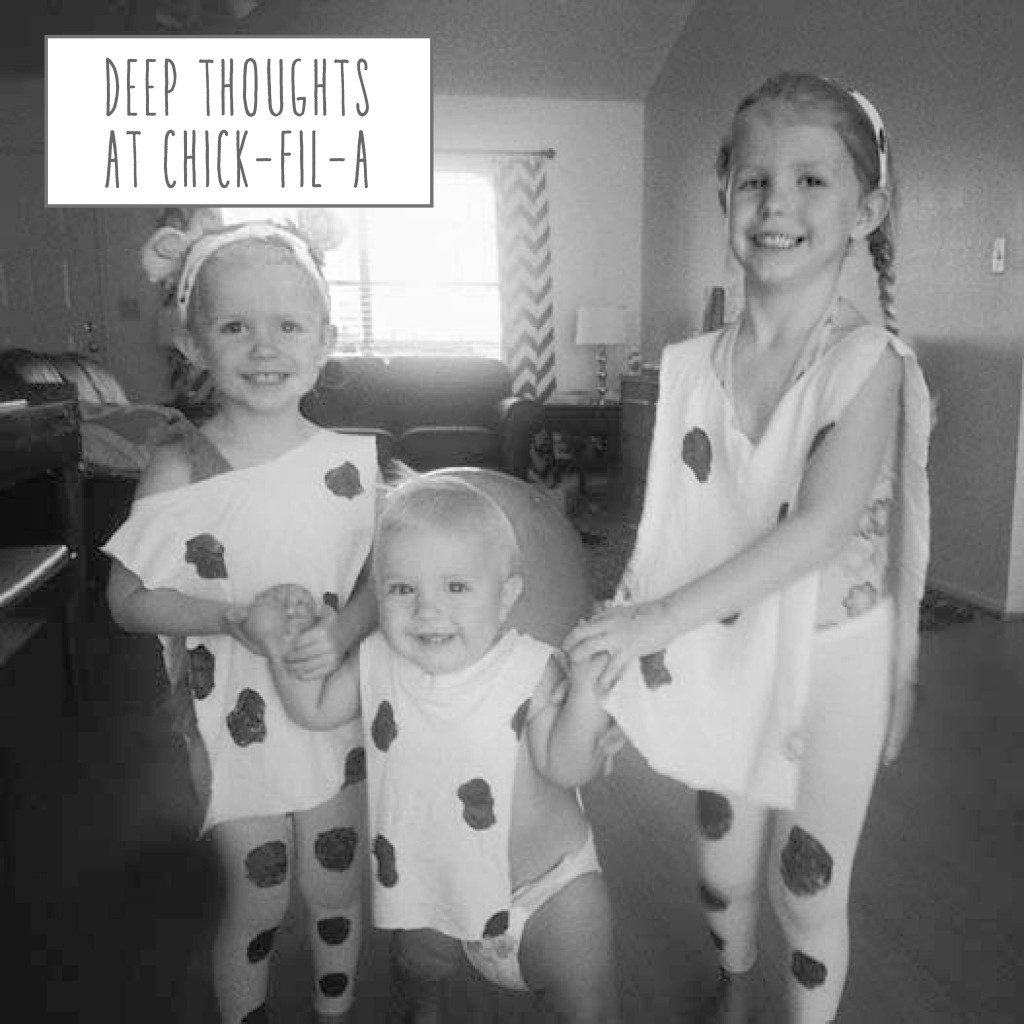 Did you participate in Cow Appreciation Day at Chick-Fil-A a couple of weeks ago?! Our family did! The place was a jungle! The line was almost out the door to order, and there was almost no one in there that didn’t have some kind of cow attire on. It was like a cow-style Halloween. My girls were so entertained just checking out everyone’s cow “costume”. It was too funny.

As you can probably imagine, the kids play area was swarming with crazy kids! I was surprised that my girls even ventured into the chaos. Before entering the play area, I always tell them to look out for each other and make sure they stick up for themselves! Ha. You just never know what’s going on inside that kid-jungle.

After them playing in there for about 15 minutes or so (my husband, baby, and I were sitting right outside the play area doors) my girls came running out really sad. My little one (who is three years old) was crying because there was a girl in there who was upset because no one would play with her. They saw her crying and they were both really upset that she was so sad. I asked them if they wanted to go in there and ask her to play with them so she could be happy. They both agreed and wanted me to go in there to help them ask because they were a little nervous. It ended with my girls asking her to play hide and seek with them, and while they were hiding, she found other kids to play with and my kids were never found. Needless to say, they came out crying that she forgot about them! Oh the drama! 🙂

What occurred to me while I was there, was how proud of my girls I was in that moment. They stopped in the midst of chaos and play, to recognize that someone was hurting and they wanted her to feel better. They could have easily dismissed the situation, but they didn’t. I saw something that night that is SO important to me to pass on to my girls- having character.

Leading up to this day, life had not been a walk in the park. At home there was constant whining, complaining, not listening, late bedtimes, and tired parents. I had felt worn down from constantly correcting my kids (especially my oldest who is five), and feeling like I was just doing a crummy job with finding the right ways to discipline. There had been lots of tears flowing from both of us. I think we were both feeling a bit defeated.

Their actions that night at Chick-Fil-A, dressed up in silly cow outfits, showed me a glimmer of hope that something was working. My training wasn’t for naught. And most importantly, they were learning something that had true value- how to be compassionate and care for another person all on their own. I think I often worry so much about their obedience because it reflects on me around other people. I focus on them not listening to me the very first time, or not having a good attitude. I’m not in any way saying those aren’t important, because they are, but the art of caring for another human greatly surpasses those.

If I could have a choice in the matter, I know I would choose that my children have character over their room being picked up, or whining less. I feel like it’s so important to record the moments when our little ones are doing the things that just fill up our “mama-hearts” when the day in and day out mundane tasks of motherhood wear on us.

So, today when those little crazies of yours are wearing on you, and you feel like you are at your end, remember you are doing heart-work! Molding those little hearts into big hearts that are going to change and influence people for good!